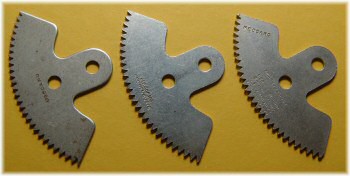 Four of these segments make up a 3 inch diameter gear, which is a very odd size for Meccano, although it should be remembered that at the time of its introduction the largest gear was the 1½'' 56-tooth gear (the 3½'' gear didn't arrive until 1924).  If it were to be at 38dp (like the majority of gears were), this would make 114 teeth, and therefore 28½ per segment.  In fact, rack segments seem to be quite variable in their design, but the majority of the examples seen are cut just after the point of the 'end' tooth.  This means that they won't fit together snugly, and if you attempt to make a complete wheel you need to be prepared to try different rack segments, and tweak their spacing within the tolerances of the holes to allow the teeth to line up well. You can very occasionally end up with 115 or 116 teeth this way.

The photo to the left shows how variable the ends can be – the join on the left is good, but the join on the right is terrible and needs opening up in order to avoid jamming.  Fortunately, only one rack segment is needed for most applications.

Post-war black 'toothed segment'
This image does not belong to the webmasters and is copyright.
Please do not download or copy it for any purpose. It has been
kindly provided for use on this site by the image owner,
Ed Barclay 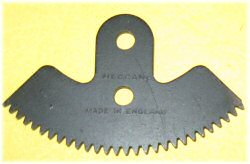 It is often thought that the part was dropped at the close of production in 1941, but in fact it did reappear for a time in blackened steel (stamped Meccano Made in England). It appears in the parts listing on the back of the manuals between 1945 and 1952 as either "Toothed segment" or "Toothed segments". It is missing from the 1953 manuals, which counts as quietly dropping the part, I suppose.

Although it has been suggested that very early 10 outfits contained the toothed segment, no examples have yet been found. The 1949 manual for outfit 10 was a close copy of the pre-war manuals, and still had the cross-hatching on the photographs. Model 10.13 "Ambulance" calls for this part as the steering rack.

Letter dated August 1953 explaining missing Toothed Segment
This image does not belong to the webmasters and is copyright.
Please do not download or copy it for any purpose. It has been
kindly provided for use on this site by the image owner,
John Nuttall
Click on this image to see a larger version.

Here's a rare and interesting bit of paperwork. The letter to the right (click on the picture to enlarge it) is from Meccano Ltd, dated 23rd August 1953, explaining that "The contents of Outfit No.10 were changed when production was resumed after the war and the Toothed Segment included in the pre-war Outfits was withdrawn...". The recipient had complained that his 9a outfit didn't include part 129. So we can be fairly sure that the outfits didn't have them, but we also can't find any reference to part 129 as a spare part. The last known mention of it being available is in the Australian price list of August 1942 (at 15/5 per dozen). Post-war price lists of June 1950 show it as "not yet available", and yet in the next price list in October 1950 the part has disappeared. We haven't yet found a dealer pack of these, and so black rack segments are a bit of a mystery. If you know something, please tell us!

John Nuttall, our resident Meccano Magazine scrutineer, has spotted this article in the February 1950 Meccano Magazine, in which there is an updated version of "How to use Meccano Parts" for the Toothed Segment. In three separate pictures, two shown to the right, the toothed segments are clearly black rather than nickel plated. So, although they were advertised as "not yet available", they certainly existed at this time, at least in the model room.

I have checked two separate 1939 outfit 10s of reasonably good provenance, and both of them contain nickel-plated Rack Segments, with the stampings Meccano and Reg. No. 680416. This proves that the nickel ones were certainly current at that date. 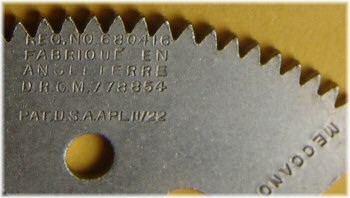 Rack segments can be dated to some extent by examining the stamping of the parts   very early ones have only the Meccano stamp, with the MFEA being added for the majority of the 1920s.  As very low volume parts, however, it is unwise to rely on these stampings, as Meccano may have had several years' supply of them in stock at any one time.

These are certainly rare, but should be out there somewhere. Does anyone have a picture? Post-war 'toothed segments' as spare parts would appear wrapped in brown paper, I should imagine.